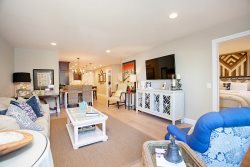 Coronado’s intriguing history dates from the very first days of European exploration up the uncharted coast of California. That date was 1542; long before East Coast settlements at St. Augustine, Jamestown, or Plymouth that many say launched American history. Spaniard Juan Rodriguez Cabrillo sailed into San Diego Bay, anchored, surveyed, interacted with local Native Americans, and sought water from Coronado’s abundant springs. Modern-day Coronado began in 1885 with the purchase of a one-time Spanish rancho that spanned Coronado, North Island and the Silver Strand. A small partnership led by Elisha Babcock and Hampton Story purchased all this for a mere $110,000. Their vision was to establish “the grandest hotel on the Pacific coast” set within a master-planned community featuring wide avenues, parklands, handsome public buildings, and attractive beachside residences. Coronado and the Hotel del Coronado would grow together, side by side, for decades — each equally benefiting the other. The beloved “Hotel Del” would become the coast’s largest and grandest hotel while Coronado would develop an uncommon level of charm in the midst of a near-perfect climate. Coronado’s history flourished in multiple dimensions. Early in the 1900s, Coronado’s weather and remote location placed it at the forefront of aviation breakthroughs.

In 1911, famed aviator Glenn Curtiss leased North Island for three years (rent free!) as a place to experiment with his newly developed seaplane. After flying the world’s first seaplane, he convinced the U.S. Navy to establish its first aircraft squadron, making Naval Air Station North Island the “Birthplace of Naval Aviation.” Navy men and women have helped shape the Coronado community over many years but Coronado’s history is also that of picturesque ferries, sailing and yachting, championship sports, revered schools, and an endless variety of historic residences. As a world-famous resort getaway, Coronado has been the destination of presidents and kings, movie moguls, Hollywood stars and visitors from every corner of the world. It has been an inspiration for L. Frank Baum’s classic “The Wizard of Oz.” But at its core, it is still an easy-going small town with tremendous cultural and historic roots — an enchanting blend that makes Coronado both unique and endlessly attractive.

Jump to a Rental